Chairman of the Polish Investment and Trade Agency

A manager with many years of experience in both government administration and the private sector, but also in non-profit non-governmental organizations.
In February 2021, he was appointed the Chairman of PAIH. Before joining the Agency, as the Director of the Department of Supervised and Subordinate Units, he was in charge of entities subordinate to the Ministry of Development, Labor and Technology.
Previously, he was a member of the board of the Wałbrzych Special Economic Zone, where from 2016 he was responsible, inter alia, for investments, finances and controls, as well as cooperation with institutes of higher education and universities. Over the four years of his tenure, more than 90 companies joined the Wałbrzych zone, including such significant investors as: Mercedes-Benz, Umicore, GTHR, LS, and Hongbo Clean Energy. During this time, the expenditure incurred in the zone increased by PLN 6 billion, exceeding PLN 30 billion in total.
In the past, Krzysztof Drynda was an advisor to the Minister for the economy. He was also professionally related to the financial sector and ran his own business in this field. Moreover, for many years he has been an active member of non-governmental organizations.
Krzysztof Drynda is a graduate of the Faculty of Electronics from the Wrocław University of Technology and is a Master of Business Administration (MBA).
He was awarded the Silver Cross of Merit of the Republic of Poland. 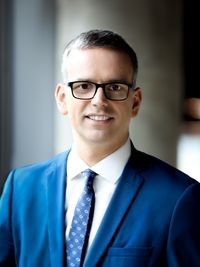